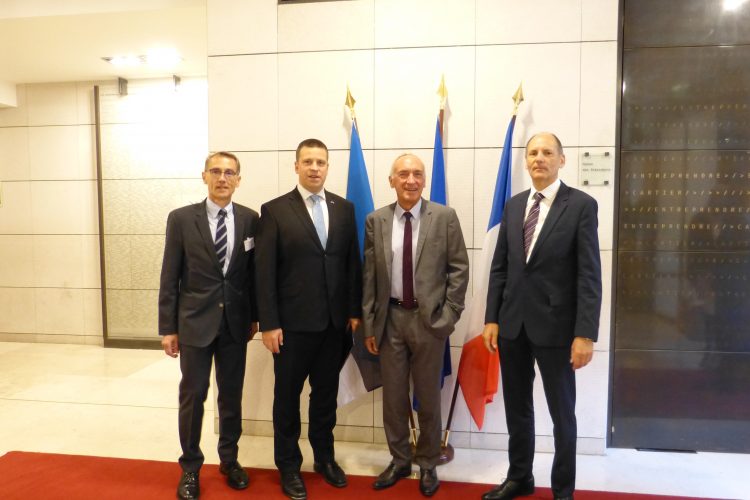 On June 16th, 2017, the France-Estonia Business Council and the Digital Task Force of MEDEF International gathered 30 French companies for a meeting with Mr. Jüri RATAS, Prime Minister of Estonia. Mr. RATAS was accompanied by a business delegation of 10 Estonian CEOs.

Organized in collaboration with the Embassy of Estonia in Paris, this meeting follows the visits of Ms. Claudia DELMAS-SCHERER, Ambassador of France to Estonia, in February 2016 and a meeting with Mrs. Liisa OVIIR, then Minister for Entrepreneurship, in January 2016.

This meeting was co-chaired by Mr. Frédéric TROJANI, Chairman of the France-Estonia Business Council of MEDEF International and Executive Vice President Government at Gemalto and Mr. Marc RENNARD, Chairman of the Digital Task Force of MEDEF International and ‎Orange Deputy CEO – Customer Experience & Mobile Banking. The French attendees had the occasion to better understand the priorities of the Government of Estonia, the ongoing or future reforms and the main projects in the country.

At the end of the plenary session, Mr. RATAS held individual talks with French companies locally-based or wishing to develop in Estonia. Afterwards, the French and Estonian companies discussed and met during a B2B session.

MEDEF International represents the French Business Confederation and 70% of the French private sector, in the world. MEDEF International has been working with Estonia for more than 25 years by regularly leading collective actions for French companies with Estonian public and private stakeholders. MEDEF International wishes to deepen France-Estonia economic relation through actions in Paris and Tallinn particularly in the Digital and the Sustainable city sectors. With more than 40 French subsidiaries based in Estonia, France is the 16th investor in the country.