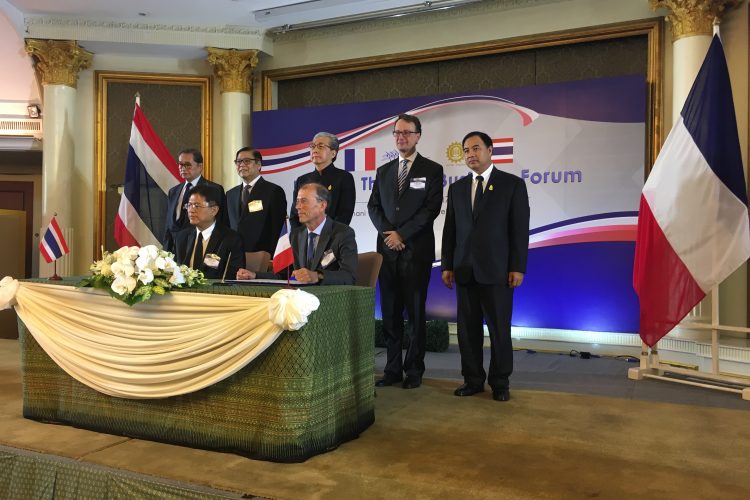 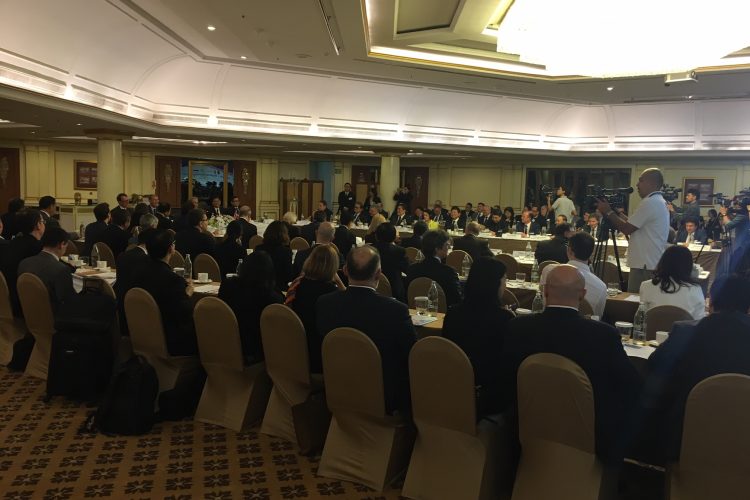 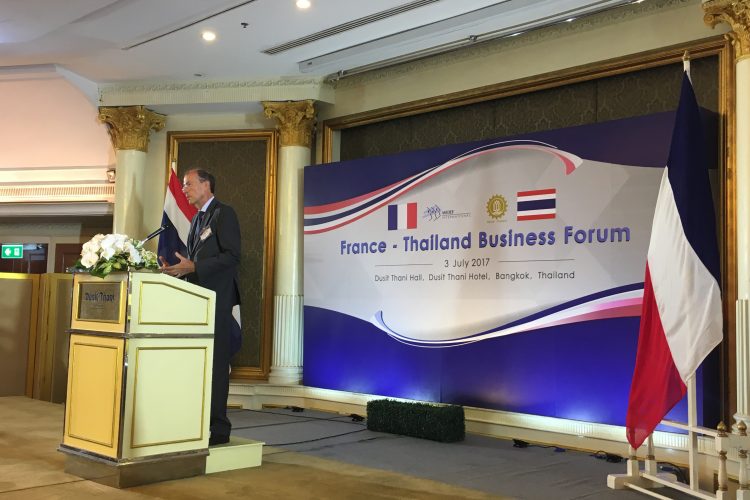 French and Thai business communities deepen their cooperation to speed up investments:

MEDEF International, the most representative organisation of the French private sector at an international level, signs a MoU with the Joint Standing Committee on Commerce, Industry and Banking of Thailand, on the 03rd July 2017, in Bangkok.

In order to support Thailand’s new economic strategy, Thailand 4.0, MEDEF International and JSCCIB-Thailand have agreed to formalize, in the framework of a joint France-Thailand Business Council, an economic and commercial cooperation, encouraging firms from both countries to create new ground-breaking partnerships.

Four areas of cooperation, in compliance with the priority growth targets of the country, have been identified: agribusiness, transport infrastructures, energy transition and smart city.

This first collaborative agreement between the two organizations will be signed by Mr François Corbin, Chairman of the France-Thailand Business Council of MEDEF International and Executive Vice President of MICHELIN, and Mr Predee Daochai, Chairman of The JSCCIB-Thailand and Chairman of the Thai Banker’s Association of Thailand.

Dr Somkid Jatusripitak, Deputy Prime Minister of Thailand, will witness the signing ceremony, which will be followed by the first French-Thai business forum, gathering 100 people, French and Thai business leaders and representatives of the both governments.

This meeting will launch the implementation of a regular dialogue between MEDEF International and the JSCCIB, in order to spring up new partnerships, helping Thailand to succeed in the implementation of the new industrial strategy and contributing to the Eastern Economic Corridor projects.

François Corbin: “Today, with Thailand 4.0 strategy, Thailand has as the objective to make its industrial sector more innovative.  Our French firms have undeniably know-how and a world-leading expertise to bring to the table. They are all committed to support Thailand in its disruptive transition that embraces all economic sectors. Past years have demonstrated how efficiently Thai and French companies and talents of the two countries are working and growing together. This MoU will bring us even closer to jointly prepare Thailand of the future.”

Preedi Doachai: “This forum is one of the most important events for the private sector of both countries, and I strongly believe that this forum will definitely offer a great opportunity to expand our network that we can exchange valuable information through a dialogue and develop cooperation in many areas of mutual interest. In this regard, I need to encourage the two countries to develop bilateral ties as strategic partners for mutual benefit at the regional and international level. France-Thailand Business Forum and signing of MOU between JSCCIB-Thailand and MEDEF International will indeed further strengthen not only the knowledge sharing amongst us, but also, increase of our friendship and business partnership between Thailand and France in the near future.”

MEDEF International, which represents MEDEF (the French Business Confederation) in the world, at bilateral level, aims at promoting the French companies’ know-how and strengthening the dialogue and cooperation with the foreign authorities and private sector abroad. Through collective actions, MEDEF International supports technologic cooperation and investments, trade, and long-term partnerships. MEDEF International had developed tight and trustful relationships with Thailand’s public and private decision-makers for the past 30 years, through the France-Thailand Business Council, chaired by François Corbin, Executive Vice President, Corporate Strategy, M&A, Progress and Geographic Zones of MICHELIN, since 2016.
With more than 250 subsidiaries located, France is the 3rd European and 9th world’s investor in Thailand.

Joint Standing Committee on Commerce, Industry and Banking or JSCCIB-Thailand was established in 1977, as an apex body of the three core private sector organizations, namely the Board of Trade of Thailand (BOT), the Federation of Thai Industries (FTI) and the Thai Bankers’ Association (TBA). Main missions are as follows; (1) Acts as a forum to share experiences concerning problems and prospect relating to trade, industry, banking and financial development. (2) Serve as a central coordinating body in providing recommendations and advice to the Joint Public-Private Consultative Committee (JPPCC), chaired by the Prime Minister and attended by ministers of economic affairs. (3) To be responsible for finding common position of private sector on relevant issues being raised in both bilateral and multilateral forum. And (4) Enhancing its role in economic, trade and investment promotion with its counterparts internationally.