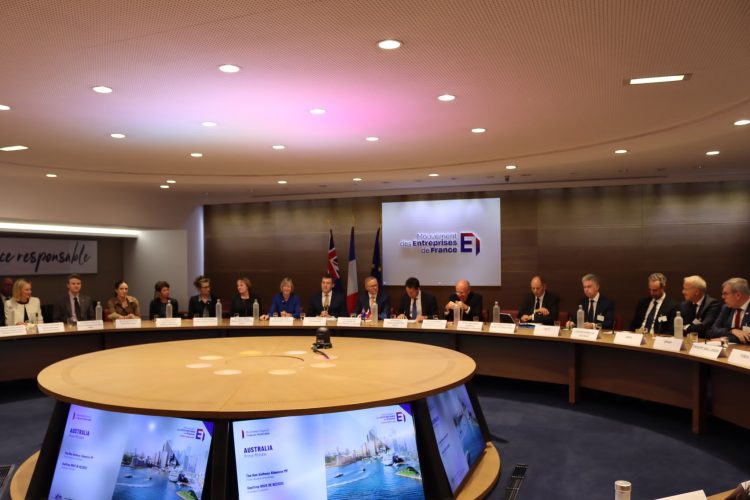 On June 30th, 2022, MEDEF International and the Australian Embassy to France partnered to organise a high-level meeting with the Hon Anthony ALBANESE MP, Prime Minister of Australia at MEDEF Headquaters in Paris. Chaired by Mr Geoffroy ROUX DE BEZIEUX, President of MEDEF, the largest employer federation in France, in the presence of H.E. Ms Gillian BIRD, Australia’s Ambassador to France, this meeting gathered 30 CEO and C-level representatives from French companies.

The French delegates raised questions about trade and investment opportunities in Australia across a range of sectors, including infrastructure, engineering, health, transport, aerospace, defense and energy. French companies reaffirmed their long-term commitment to Australia and expressed their desire to further explore new business sectors such as hydrogen and low-carbon energy.

The importance and the mutual benefits of finalising the Australia-European Union Free Trade Agreement were underlined by both parts. An ambitious and comprehensive agreement will help support the post-pandemic economic recovery, diversify trade, and reinforce a shared commitment to the international rules-based order.

This session was part of the MEDEF International France-Australia Business Council’s consistent program of activities with Australia, and a new illustration of the close partnership with the Australian Trade and Investment Commission (Austrade). It follows the many high-level webinars held over the past year with Commonwealth, State and Territory authorities, and a 28 June meeting at MEDEF with around 30 business delegates, led by the European Australian Business Council (EABC).